I've been journaling daily for 6+ years, but stopped this summer. There are many reasons, but one stands out: it makes me sad to read my journal.

DayOne app has a nice feature: show entries for “this day over the past years”. I used to start each morning by reading 5-6 journal entries from the previous years. This routine has been more or less automatic, and it didn't feel like it was in any way affecting me. It took me an unreasonable amount of time to realize how disturbingly repetitive my journal entries are. Most of the time I was “temporarily sad” or “feeling depressed” or “tired and frustrated, whatever”.

It goes on and on… 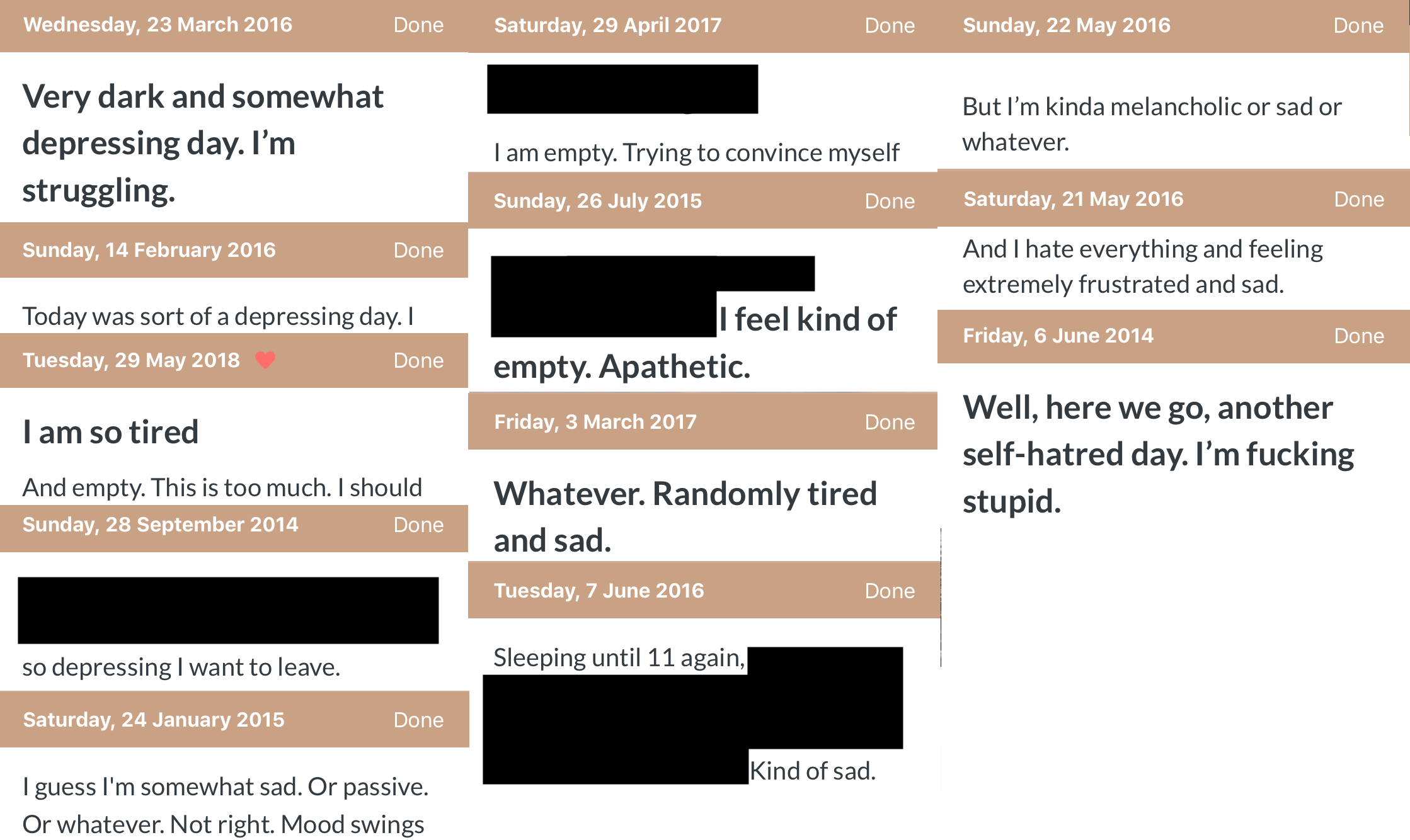 I felt lonely most of my life. I can't say I had ever had long, true friendships or partners. I remember tolerating most of the circumstances and people, at best. But, being a young university student around 10 years ago, it wasn't an issue: there were too many things to worry about, and there were ways to relax and dumb down the brain, if you know what I mean. The body can really take a beating so that the mind is spared.

Closer to graduation, I found myself frustrated with everyone and everything around me. I deliberately made myself completely alone and isolated, in a foreign country, working in a different town, so that I can “leave” multiple times a day: leave home, leave the town to commute, then leave the office, leave the group. I didn't talk to anyone except colleagues during weekdays and the person who became my girlfriend and life partner several years down the road. She eventually became the only person I could discuss these issues with.

For almost 8 months I had a bizarre groundhog day experience every day. It didn't do good.

In 2012 I left the country, changed jobs, got back into public speaking, finally met that girl. It felt like things are changing for the better.

Turned out, those external events had nothing to do with the way I felt inside. It's hard to fathom: even a 100% change in circumstances and environment could theoretically contribute exactly 0% to the internal feeling.

I didn't take notice and kept chasing. Another city, another job, another side project. 10 months in — no, back to the other city, another job. No, working for the man is not for me, I want my own business. Attempt one, attempt two, attempt three… I have no idea what I'm doing. I know! Startup! Investors! Rounds! Yes, this is what I was missing!

I went all in. Quit my job, started learning about startups, lean and customer development. Pitching like crazy, applying to bootcamps and “accelerators”. Dreaming of Round C. It was an efficient, but costly life-filler.

As you can imagine, that didn't do good either.

Co-founding a startup when you're not right mentally and when you have no idea what you want is a bad, bad idea. Almost hitting rock bottom money-wise, risking the livelihoods of multiple people and your own legal status in a country you're trying to make your home is a fucking shit show of emotions and, surprisingly, numbness.

I guess, statistically I was numb most of the time, not frustrated or tired or depressed. Just numb, slowly moving towards that dark and moist sweet spot of groundhog-day-like existence. Daily routines became the refuge. Weekends became wanted again, not because I could relax, but because I could ignore.

I remember washing dishes being the best thing to do some days. Yeah, washing dishes for an hour, slowly going through a pile, seeing definite progress, having my hands in nice, warm water, having a feeling of accomplishment in the end.

Surprise! Investors don't really like it when you're stalling. Or have no plans for the next quarter. Surprise! You're not CEO material. Not leader material, really. Surprise! You still have no idea what you want.

Self-hatred-driven personal development is a promising area of self-help literature, I think.

Surprise! You suck! Go, write that in your dreary sobbing journal.

As an example of things piling up on top of all this: the government retroactively stripped me of the scholarship they awarded me with 12 years ago for “violating” a condition that is not in my contract, but exists in their internal documents which they failed to provide after numerous requests. Seven years after graduation, I was handed a large, unexpected student debt. Suing the government doesn't really work there, so, yeah…

Or a business partner threatening us (co-founders) with “legal action” for not taking the canonical growth startup path, but rather deliberately deciding to stay small-ish.

After multiple roller coasters, after months of not being able to do any meaningful work, after a personal trip that didn't go well, I found myself broken. I didn't have suicidal thoughts, don't worry, but I remember feeling that it doesn't matter if I die. I mean, I don't want to, and it won't be good for my partner and parents, but, you know… it's not… yeah. It's just “whatever”.

It made me shiver when my mother, whom I see about once a year since I left home at 18, told me “your eyes seem faded”. Before that I used to think I'm pretty good at hiding this shit inside.

Last week I decided to step down as CEO of Hexlet, the company I co-founded in 2015 with Kirill Mokevnin. I started it as a hobby project in 2008 and it grew to a profitable educational business with 200 000 users and 7 employees. It has great potential, but it needs a real leader.

I guess, first things first, I need to fix myself at least to the point of making money to pay off the unexpected debt. I know intellectually this is possible. And maybe this is the kick in the butt that'll do good. Or not.

Sometimes I am able to force myself to work creatively and produce something like an article for this blog or a video for my channel or a podcast. The moment of publishing and getting any sort of feedback brings a fleeting feeling of hope, but inevitably leads to a period of numb emptiness, followed by self-deprecation for feeling that way. Sustainable creative work is the hardest thing to achieve.

There are things that definitely contribute positively: I started working out and taking care of sleep, I'm trying to cut on bad food and understand nutrition better. Again, intellectually it all makes sense, but for now, I am as lost as ever, dazed and uncertain.

I don't know why I'm writing all this. It promised to be cathartic, but maybe I should stop listening to external promises…