The first memories I have are bike-related. The best ones are, too. 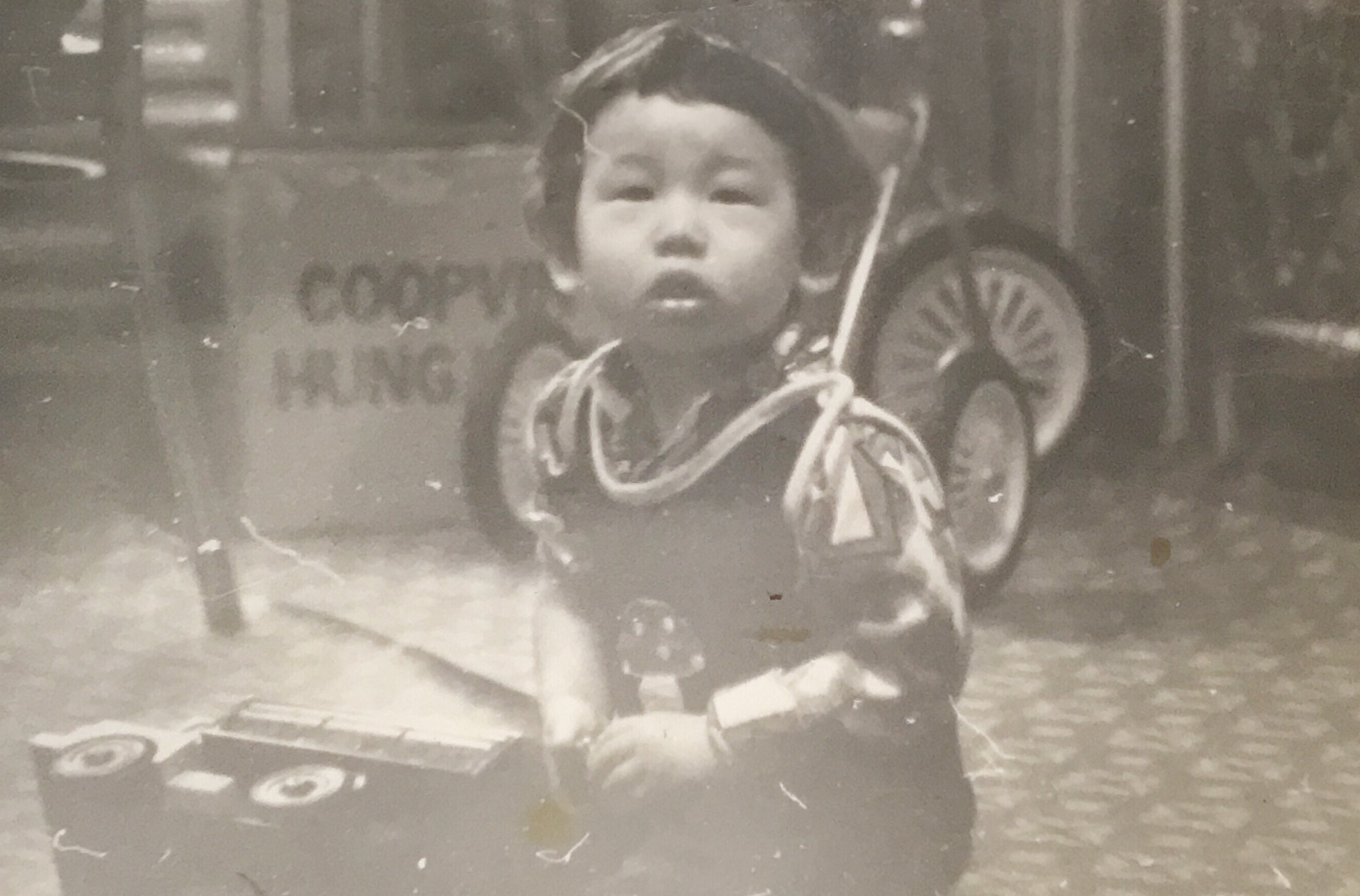 My first bicycle was a tricycle

My first serious bicycles, the ones that let me explore the city, were old, steel soviet tanks. They were simultaneously indestructible and always broken.

My friend Eugene and I spent summers biking around town, forests and river valleys. It was awesome. 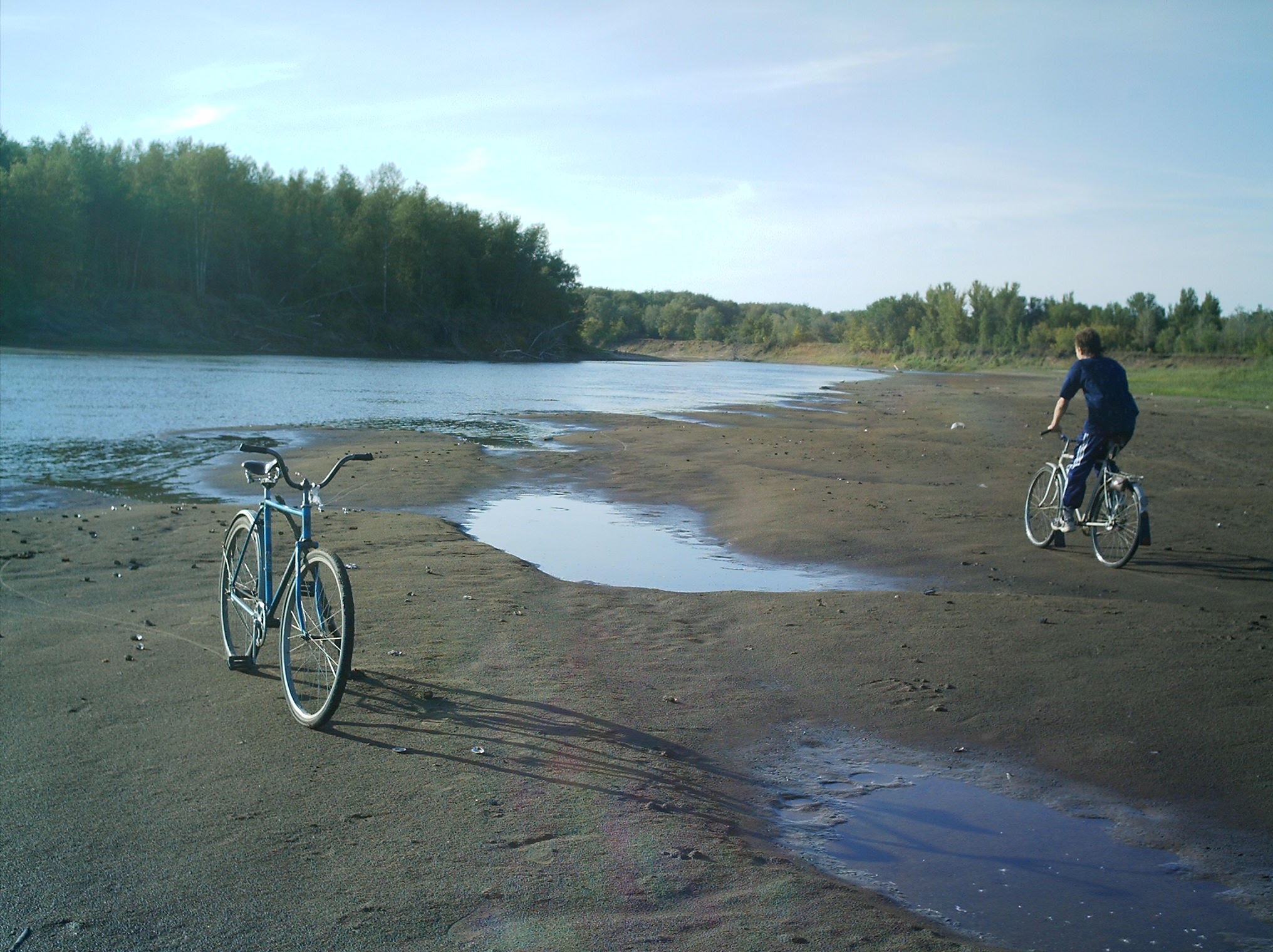 Eugene riding away, my bike in front

Those bikes were all-purpose vehicles. Well, at least for us they were. Pavement, gravel, sand, water, whatever. They go where we go. They were simple and stupid, and I loved that. No speeds, no hand brakes.

I used to live with my grandma until I was 13. Her apartment had a narrow corridor connecting the entrance to the room, and I can't imagine it without a bicycle. It was always there, and when it wasn't, I wasn't home. Out biking god knows where.

I had a dream of driving a city bus, so quite often I spent hours biking along the bus routes, stopping at bus stops, emulating a bus. An old pen was diligently placed inside the handlebar, sticking about 2 inches outwards: it was my fake turn signal lever. I had to make the turn signal clicking sound myself, of course.

Then I moved to Canada. My next bike was a pretty cool steel Schwinn I got as a gift from my host family in Ottawa. Bicycle freedom had suddenly expanded. Now I could ride to another province where people speak a different language and traffic lights are horizontal. I could bring my bike on the train and get further than ever. I could disappear into the city and nobody could find me. 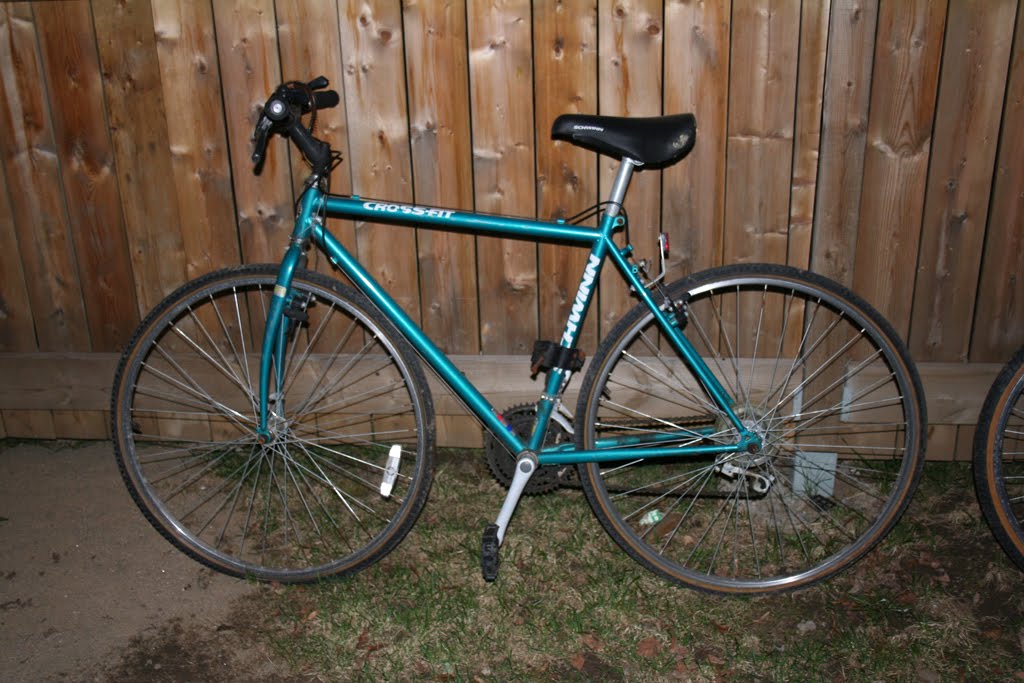 I didn't appreciate this bike enough. I wish I could get that frame back…

Several random used bikes later I decided I'm ready to spend serious bucks and try road biking. With 1000 Canadian dollars in hand, I walked into a bike shop in western Ottawa and got myself a beautiful aluminium Trek 1.1.

Freedom was reinvented once more. With this light, fast bike I could go further than ever before. First 100 km ride was a revelation. Then 350km in 2-day group event. Then 500km in three days. Then more than a 1000 km in a week across multiple provinces to see the ocean. 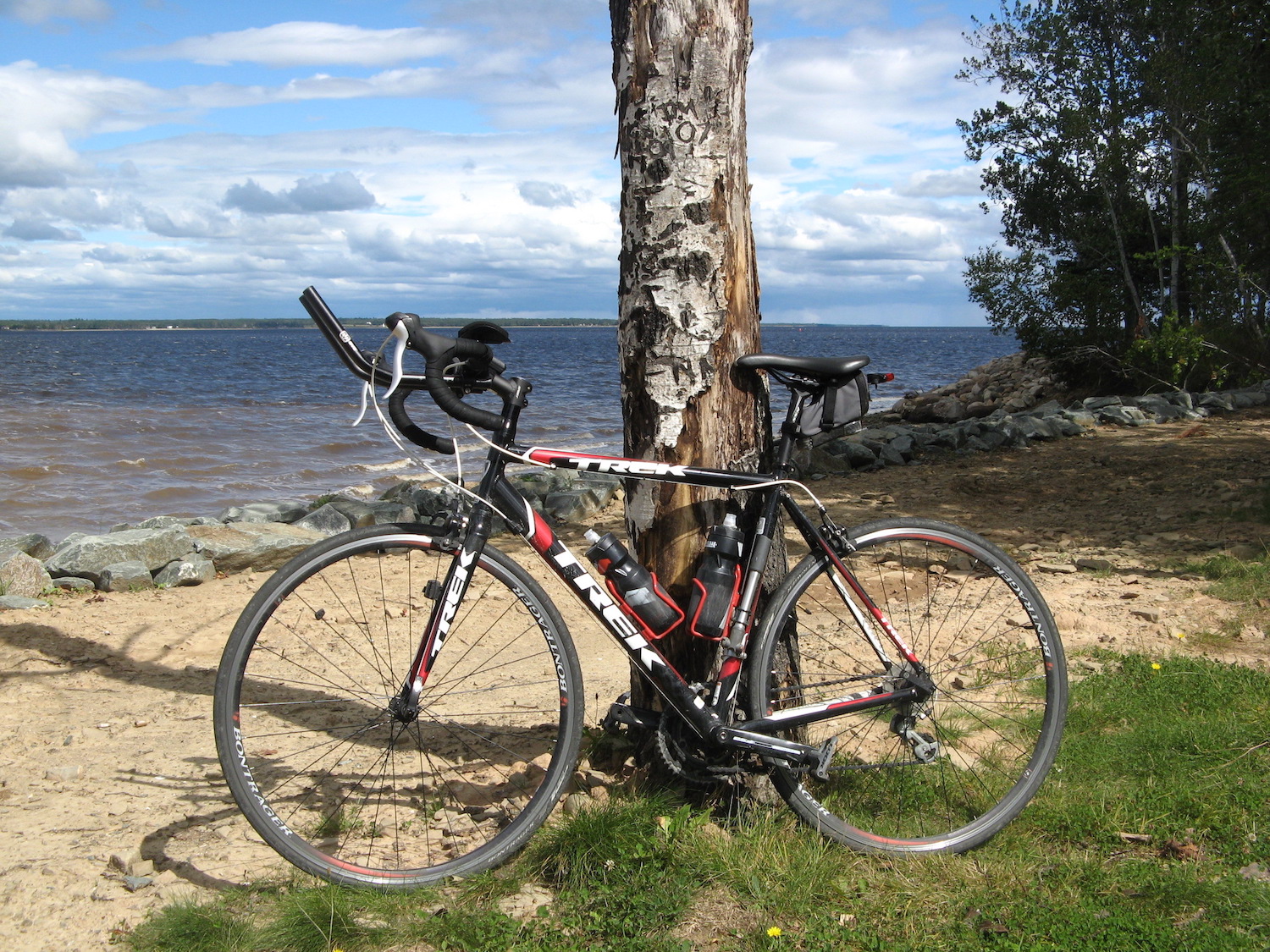 At the end of my long trip to see the Atlantic Ocean, New Brunswick, Canada

I was in love again.

I was about to finish my computer science degree and was feeling somewhat down at times. That bike was the best thing in my life.

Biking and computer science made perfect sense to me. Both are about efficiency. Both are tools, but at the same time fun in and of themselves. Both let you be alone.

They let you disappear into a vast domain and get lost.

After moving from Canada to Kazakhstan, I stopped biking. It took me almost 5 years to re-ignite the passion.

After moving to Finland, I decided to try a single-speed and got a pretty Swedish Stålhästen Sport fixed gear bike with a flip-flop hub. Fixed gear is not my cup of tea, so I flipped the wheel and started discovering the Helsinki area.

It was pretty sexy.

But alas, we weren't for each other. We just didn't click. A bicycle is an intimate object for me, along with backpacks and computers. I can't just have one, I must love it. So I sold it to someone who, hopefully, loved it.

And got myself a cyclocross Kona Rove Al 2015.

The relationship with this one was complicated. I loved it and sometimes hated it.

I loved my Kona because it was very comfortable, fast and looked very cool. Its brownish color was a perfect fit for the forests and fields I took it to. Disc brakes — first for me — made me more confident on narrow descents and uneven terrain.

But I didn't love the maintenance. It was equipped with the cheapest components. Decent, but not awesome. Shimano Claris groupset and mechanic disc brakes were never perfect. The bike was never perfectly tuned, never perfectly silent. And I'm ashamed to admit, but I'm a crappy handyman when it comes to bikes. Actually, I'm a crappy handyman in all areas where “undo” is not an option, but I'm particularly bad with bicycles. Derailleur adjustment and disc brake calibration are black magic to me. Hours of sweat and profanity and I end up with a subpar configuration. It works and it's fine, but it's just not very good. Then I say “screw this!” and bring the bike to a mechanic.

By the way, good bike mechanics are pretty expensive in Finland.

I've later learned that better groupsets and hydraulic brakes (or at least the hybrid dual-piston ones) are so much better, and I honestly almost convinced myself to spend two grand on a very good bicycle. Because then I will ride more, right?

Kona Rove Al was my bike for three good seasons, but the furthest I took it was a 120 km one day ride. It never saw other regions of the country even. We weren't too adventurous together.

This summer, after another failed attempt to eliminate 100% of the disc brakes noise, I decided to say goodbye to Kona and look for something new.

A romanticized and, perhaps, irrational desire to simplify struck me again. What is the simplest bicycle possible? Single speed with coaster brake. I love handbrakes, so, rim brakes then. But I wasn't sure I could do single-speed again. I love my knees.

Then I discovered internal hubs. They look and feel like single-speed from the outside: no derailleur, no cable slack. My girlfriend and I got ourselves small folding bikes with Shimano Nexus 3-speed hubs and they are very nice. Simple, reliable, solid.

There also exist 7-speed Nexus hubs, but I haven't tried one. They are pretty heavy and it's a pain to install them with dropbars.

Turns out, there are also automatic hubs! Woah! Extremely curious, I got myself an old Fixie Inc. Floater with Sram Automatix 2-speed automatic hub.

The experience is… interesting. You just start pedaling and at about 15 km/h the gear changes automatically. It's pretty solid, no wobble or anything. It's like you're suddenly teleported into higher gear. This shift point it ridiculously low though. It was pretty easy to disassemble the hub and change the shift point by unwinding a tiny metallic spring (here's a good description).

At first, it seemed like a good compromise. Almost as simple as a single-speed, but the second gear allows to keep a sane cadence at higher speeds. Unfortunately, the hub is not as isolated from the outside world as other internal gear hubs, so it will require some maintenance.

I took it on multiple rides and just didn't love it. What a picky, delicate flower I am.

And then, completely by chance, I had a chance to ride Bombtrack Arise. A single-speed, steel gravel bike.

Yes! It made me smile!

I'm not a fast rider, so when it comes to gearing, comfortable climbing is more important to me than going fast. Finding the perfect ratio for a single-speed takes time and lots of cogs, but this bike came with what seems to be the perfect ratio for me: 42 teeth chain ring and 17 teeth rear sprocket. With 28” tires, it yields 69 gear inches, which works very well for the steepest hills in my area and is good enough for descents.

This handy bike calculator helps to figure out the good ratio for a given cadence and speed. For my new bike, 90 rpm produces 28.4 km/h, and the high cadence of 130 rpm yields 41 km/h.

Single speed forces me to be more disciplined and think ahead. I can't just attack a hill on a granny gear anymore, I have to save as much momentum as possible. At the same time, this creates ultimate freedom. I don't think about optimal gearing, I am always in the right gear.

Steel frame is lovely and comfortable, it feels softer, yet more confident. The simplicity of not having so many extra things inspires almost a zen-like feeling. Oh, and it's quiet. No chain slap.

I am yet to take the Bombtrack on a truly long ride, and it might not be as peachy as I describe. But so far, with about 250km behind, I remain in love.

Find a bike you enjoy, it will make you happier.